Mushrooms and Their Magic 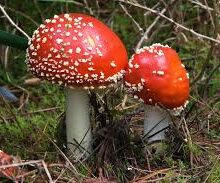 Before I discuss the magic mushrooms also known as shrooms, I would like to share the benefits of eating common mushrooms. There are over 100,000 species of mushrooms. The mushrooms I will share are Saprotrophic fungi. They grow and feed on dead plants, trees, animals and insects helping clean up the environment by recycling organic matter into fertilizer and soil. Nutrient-dense, they provide an array of health benefits.

The most common type of mushroom is the white button mushroom. One particular study shows white buttons are beneficial as a potential breast cancer chemopreventive agent, as they suppress aromatase enzyme activity and estrogen biosynthesis, inhibiting the growth of cancer cells. Cremini mushrooms, with its light brown cap are called Baby Bella or Baby Portobellos. They are more mature white button mushrooms with a slightly firmer texture. Portobellos are white button mushrooms that have matured where the cap is fully spread. They are a good source of Vitamin B-3, or niacin, which plays a role in a healthy nervous system and energy production.

Shiitake, a familiar mushroom used in Chinese cooking is the 2ndmost common mushroom and known for its healing properties. They contain vitamin D and B vitamins, selenium, cooper and zinc. According to Memorial Sloan Kettering Cancer Center, Shiitake mushrooms are beneficial as an anti-cancer agent and immune system by booster. Studies have shown shiitake is effective in lowering serum cholesterol and inhibits arterial wall plaque build-up. They are high in potassium and low in sodium, which helps lower blood pressure, thereby supporting cardiac health. Lentinan, a fungal compound found in shiitake, was used in a study with cancer patients. The results showed an increase in survival duration, tumor necrosis and a reduction in the recurrence rate.

Enokitake, or simply Emoki, look like dainty sprouts with thin, long stems, and have a crispy texture. Chock full of B vitamins, this mushroom can help lower cholesterol and triglyceride levels. A report by a physician in Japan noted Enoki farmers consuming more mushrooms than non-Enoki farmers had a lower cancer death rate.

Known as the “king of the mushrooms”, Reishi has been used in Chinese medicine to boost the immune system. As an adaptogen, they help relieve and manage stress. They soothe the nervous system, promote mental clarity, and aid in promoting sleep. Chinese forklore claims that consuming Reishi, also known as Lingzhi, enhances spiritual enlightenment and longevity.

I suggest only eating cooked mushrooms, so any toxins found in the mushroom are destroyed by the heat. Cooking them also makes it easier for the body to absorb the vitamins and minerals. I encourage buying organic mushrooms. I also recommend only picking wild mushrooms if you are 100% positive which mushrooms to pick. Some mushrooms are poisonous causing allergic reactions, nausea, vomiting, and diarrhea, etc.

Now, let’s review the famed Magic Mushrooms. The ingestion of these powerful psychedelic or hallucinogenic mushrooms is an ancient practice used in religious ceremonies perpetrated by shamans for thousands of years. The purpose was to connect with the spirit world. There are nearly 200 species of mushrooms containing the psychedelic compound psilocybin, according to the International Journal of Medicinal Mushrooms.

The magical mushroom crusade was started in the West in 1957 by Gordon Wasson. As the story goes, Wasson, former VP of J.P. Morgan & Company, went to a mushroom shaman in Mexico where he first tripped. Time Magazine published his account of his experiences titled, Seeking the Magic Mushrooms. After reading Wasson article, psychologists Dr. Timothy Leary and Dr. Richard Alpert (known today as Ram Das) at Harvard University, conducted the Harvard Psilocybin Project, in 1960 that included other psychedelics. After being fired for their actions, they decided to start the 1960’s psychedelic movement. Then in 1971, psilocybin was declared a Schedule I drug in the US making it illegal.

Psilocybin mushrooms, known as “shrooms”are illegal in most countries. When I lived in St. John, USVI, I remember hearing about the droves of people flocking to drink the “shroom shakes” every full moon at The Mushroom Shack over in Tortola, a British Virgin Island and one of the countries where psilocybin is legal. To be clear, I do not advocate the use of psilocybin where it is against the law. This article is not intended to encourage tripping.

Commonly known as a waking dream, the body and mind experience sensory, perceptual and emotional changes along with a distorted sense of time. Tripping on mushrooms is different for each person. After ingesting, the affect can take between 30-90 minutes and last up to 12 hours. While tripping, it has been reported to have a sense of awe and introspection, relaxation and peace, and a spiritual connection with the world and universe. The body may experience changes in breathing or heart rate, or challenges with coordinated movement.

A bad trip can involve paranoia, bizarre behavior or disturbing hallucinations. To help prevent a negative trip, it’s important to be clear on what, where and why you plan to have this experience. Know how much you will be taking, and who will be with you, preferably someone who will not be tripping at the same time. It’s important to note that mistaking the psilocybin with a another can be fatal.

In the 1950’s, before psilocybin was made illegal, preclinical trials were promising, and then all research ceased. Today, there is new research on the rise, using psilocybin therapeutically and in spiritual enhancement programs. Medical professionals are looking at treating debilitating cluster headaches, cocaine and alcohol addiction, obsessive compulsive disorder, and mood disorders like anxiety and depression. In the Journal of Psychopharmacology, studies show a decrease in alcohol consumption among addicts after administering psilocybin, and an 80% success rate with stopping smoking after 2-3 psilocybin treatment sessions. These studies will continue to provide valuable information and treatment. There is much to be learned about the medicinal properties of the plant and fungi world.

The information contained in this article is for educational purposes and is not intended to be a substitute for professional medical advice, diagnosis, or treatment. Consult with your doctor first before starting any new practices or health programs.

Copywriter Notice: No part of this article may be used without written permission of Jan Kinder.

July 8, 2018 | by Jan Kinder | No Comments
Categories: Uncategorized.
« An Ayurvedic View at Clearing Stress: Does Your Body Type Matter
3 Practices to Open Awareness and Melt Stress »