Water And A Mission 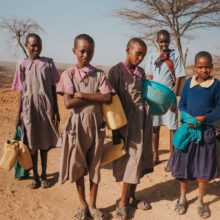 Water. We cannot survive without it. We turn on the faucet and flush our toilets and don’t think twice until our situation changes perhaps due to natural disasters or failing infrastructure. This article is a little different from my other writings yet still educational as I spotlight one group and three outstanding women.

I recently learned more about our worldwide plight concerning the lack of clean water and what women are doing to open awareness and create change. The following unsettling statistics were brought to my attention.

I’ve come across many not-for-profit organizations doing significant humanitarian initiatives. Lately, one has stood out. The Waterbearers, a 501(C)(3) charitable private foundation. Their mission is “to inspire women who have access to clean water to get it to those who do not.” This organization was co-founded in September 2017 by three noted visionaries and social entrepreneurs, Jane Brinton, Erin Toppenberg, and Spryte Loriano. They believe in empowering women globally to step up and take care of the health of their families and communities.

In many countries, collecting and dispersing water is the responsibility of the women and girls of the community. As stated on this organization’s website, “on average a woman walks 3.7 miles to fetch water, often before dawn putting herself at risk. Despite this, the water she collects is unsafe to drink.” Dirty water increases the probability of life-threatening water-borne diseases. To help make safer water, these women must boil the water first. This is not always possible with the cost of firewood and charcoal.

The founders are working together with ambassadors of 28 countries directly helping the people of nations in need of clean water. Ecuador, Hawaii, Liberia, Mexico, Nepal, Nicaragua, Puerto Rico, Sierra Leone, Thailand, and Uganda are some of the countries served. The women of these communities are shown how to use the donated water filters, which eliminates the need for firewood to boil water. The water system is modest in design, simple to operate, and makes clean water quickly.

One story on their website touched my heart. As many of you may already know, I lived in St. John, US Virgin Islands for 25 years, so I am sensitive to the challenges of island life. The devastation that occurred in the islands after Hurricane Irma and Maria in September 2017 was horrific. Puerto Rico was one island greatly affected. Access to fresh, clean water to the residents was critical. Unfortunately, many people got sick, and some died from drinking contaminated water. This was still a significant issue in April 2018. Jane Brinton of The Waterbearers answered the call for help. Her team arrived on-island and supplied the women in the rural sections of Puerto Rico with the water filtration systems and showed them how to use it for maximum efficiency. The full story and many others can be found on TheWaterbearers.org website.

My intention for writing this article is to share information to expand your awareness about the initiatives created by women for a better world. I donate a percentage of my workshop tuition income to The Waterbearers. When I found out every $50 I give produces one million gallons of water or can provide clean water to 100 people a day for up to 10 years, I was thrilled to help. Water is a concern for all.

April 30, 2019 | by Jan Kinder | No Comments
Categories: Uncategorized.
« Your Shadow Self
Burnout vs. Stress: What You Need to Know »